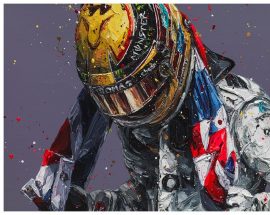 Well known for travelling the world with F1, Paul has also been commissioned for Bruno Mars to mark his 24k Magic World tour, Muhammad Ali’s 70th, by Sir Brad Wiggins to celebrate his 2012 Olympic victory, and by Star Trek to mark 50 years.

Creator of the life size bronze statue to mark 25 years with Instituto Ayrton Senna, on permanent display at McLaren’s Woking HQ. Commissioned by F1 to mark the 1000th GP in Shanghai.

Corporate projects and recent live painting performances have been with Lamborghini, F1 Paddock Club, Pirelli, Monster Energy, Petronas and Epson. With Scuderia Ferrari in Monaco, with McLaren to mark Jenson’s last race in Abu Dhabi, and with Mercedes AMG Petronas in Barcelona and Mexico City. With Team Sky on the Tour of Britain, at Chelsea FC’s Premiership title winning party, and annually with England Rugby at the RPA Awards.

Solo shows include ’80’s Kid’ in London, ROAR! with Bristol Zoo and The Art of Star Wars. F1 shows at Silverstone, Mexico City and Singapore race weeks, at the Fairmont hotel on the Monaco hairpin, and with British Embassies in F1 cities under their global banner ‘Creativity is GREAT Britain’.

As well as commissioned work, limited editions are released of many pieces – hand embellished canvases with loads of paint added on top with the same tools and technique to bring them as close as possible to the original.